Humans have dialects, and these dialects vary with both space and time. Studying these dialect changes can tell us about the behavior, movement, and culture of their speakers. Importantly, however, humans are not the only species with dialects. Long-term research has shown that different groups of sperm whales have different dialects as well. 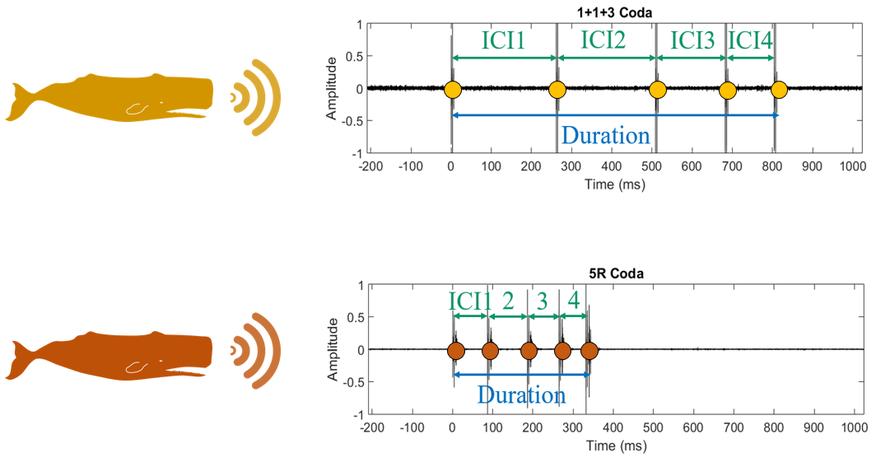 Here, two sperm whales are making two very different codas. Each coda has five clicks, but the spacing between the clicks and the overall duration differ. Spectrograms provided by Wilfried Beslin.
Despite our general knowledge of sperm whale dialects, the question of how dialects initially evolved and how they may (or may not) be evolving today remains enigmatic. We also don't know how many cultural clans exist worldwide or how dialects vary on a global scale.
Research Objectives
The goal of my Ph.D. research is to determine how clan dialects vary with space and time on a global scale, and to use that information to facilitate more effective and biologically-relevant management. More specifically, I will:
Why is this research important?
The question of how to effectively manage species that are both highly mobile and highly cultural has gained increasing attention in recent years, and a 2014 Convention on Migratory Species resolution specifically encourages research that improves management of socially-complex species, with the understanding that some species are best delineated by cultural behavior. Sperm whale populations are most clearly structured by dialect, but the species is currently managed using outdated geographic stocks. If we can better understand how many cultural clans inhabit different parts of the world and how their dialects do (or don't) change over time, we may be able to use acoustic data to facilitate more culturally-sensitive management. Such management would address the fact that different cultural groups often fast vastly different challenges and pressures.
Collaborators and funders